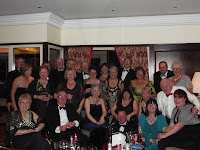 The formal evening was really spectacular. Everyone looked so fantastic in their finery. It’s amazing how well we all scrub up!! The dinner menu of up to seven courses was delicious, and beautifully cooked. My Beef Wellington was a perfect ‘medium rare’ and extremely tender. Chris enjoyed a plate of very pleasant pheasant. Company at dinner was entertaining and animated, and many of us met up in Andersons between sittings. No doubt others will also tell how they spent their final evening on Aurora. Chris and I watched a very funny comedian and impressionist, then joined a syndicate team quiz in Vanderbilts, where our team came a very respectable second.
So before I leave this blog, here are a few thoughts about the ship.
This was my third cruise on Aurora, the first being the maiden cruise break in her very first year, and more recently a family 10 day Christmas cruise to the Canaries. That last cruise was our final family holiday with my late Mum, and I was left with some very special memories. I do confess a moment’s emotion about Mum as we boarded on Saturday, but this in no way altered my opinion of the ship. Aurora is a friendly, well designed and elegant cruise ship. I would happily cruise on her again. The changed arrangements for disembarkation were a real bonus and meant we could pack at our leisure and leave the ship at any time of our choosing up to 10.00 am.
Thank you so much to everyone for making this event such fun. I feel I have made a whole new circle of friends. 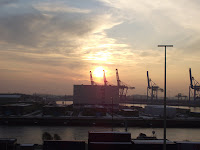 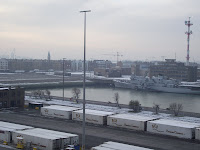 It is still bitterly cold. A few snow showers invaded the ship overnight, and we awoke in Zeebrugge to see the cranes and containers wearing a covering of white.
Zeebrugge means ‘Bruges on Sea’ and is a village on the coast of Belgium. It serves as both an international port and a seafront resort with hotels, cafés, a marina and a beach.
The harbour was the site of the Zeebrugge Raid in April 1918, when the British Royal Navy put the German inland naval base at Bruges out of action. Admiral Roger Keves planned and led the assault that stormed the German batteries and sank the ships in the harbour to block the entrance to the base for the last seven months of World War 1.
Later, Zeebrugge's harbour was the scene of disaster when in 1987 the MS Herald of Free Enterprise passenger ferry capsized killing 193 people.
P&O trips and DIY train journeys were also available to the picturesque town of Bruges, but having visited before, Chris and I chose to catch the shuttle bus into the nearby seaside town of Blankenberg. Apart from the sandy beach, there's a structure unique along the Belgian coast, a 350-m long pier, which was constructed in 1933. There is also an impressive esplanade and numerous little shops and cafes. As we walked up the main high street, we bumped into several other groups of Crowsnesters, well wrapped in warm coats and hats. Chris and I made it as far as the snowy beach, then turned around to rediscover the heated shuttle bus and the promise of lunch. 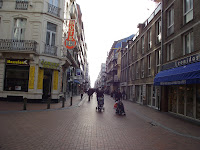 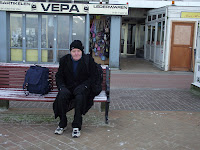 And now I have a confession, which will shock you. Yesterday evening Chris and I were late for dinner. We joined the Cruisekings champagne party at the originally agreed time of 6.00pm and were just about to head for 1st sitting at 6.30, when someone told us that P&O had brought the time forward. First sitting had started at 6.00. All those threads about ill-mannered guests arriving late for dinner, and this was how we chose to introduce ourselves to our table companions!
In our defence, a fair few people turned up at 6.30, but the new time was written in Horizon paper, so we should have read it properly. Thank you to Cruisekings for the wonderful champagne, and thank you to the table for your forgiveness as we tried to catch up on our dinner courses! I was wonderful to meet the entire group and make so many new friends.
Posted by Claire at 09:41 No comments: 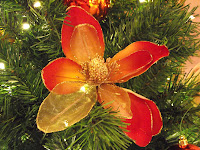 It is bitterly cold. The weatherman promised snow and I had imagined large white flakes floating on to our cabin balcony. Instead we have occasional sleet, and the distant call of a pipe band from the quayside.
Yesterday, having arrived at the Southampton Hilton a day early, Chris and I caught the bus into the city centre to indulge in some shopping therapy at West Quay. The shopping centre was well organised and beautifully decorated for Christmas, but with temperatures hovering around 0 degrees and vast numbers of indecisive shoppers meandering through the aisles, we only stayed in town for a couple of hours. At first Chris had been extremely tolerant of my desire to shop, but I began to notice emerging signs of retail rage, so we kept the trip quite short. The ‘Blue Star’ bus system in Southampton is very good. It provides a very regular service, and it was easy to find the number 1 bus back to the Hotel. On our return, two white vans were delivering Christmas to the Hilton Hotel. They offloaded a selection of decorated trees which 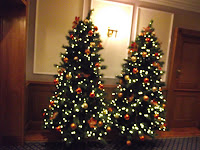 were placed in the various lobbies and public spaces.
At 2.30, I headed to the reception desk to see if I could take a couple of pictures of members arriving with their suitcases. Too late! There in the lounge bar was an already established flock of crowsnesters indulging in their very own meet and greet, and beverages of varying strength. It was easy to recognise some people, but more difficult with others. All in all we were a very friendly bunch determined to enjoy our time together. 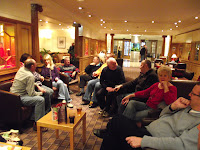 At about 6.30 we regrouped in the bar, groomed and polished in our finery, ready for our evening meal. The hotel had arranged long sociable tables on a raised area of the dining room from where we could look down on our 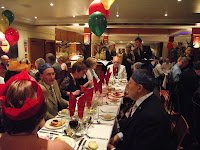 fellow, non-nesting, diners. The conversation flowed easily, and there was loads of laughter. The food was, perhaps a little corporate, but with Aurora in our sights, it mattered very little. At the end of our meal some’ disco’ed, some chatted, and we gradually dispersed to our hotel rooms to gather our energy for the morning.
We are now sailing towards the Solent for our very first Crow’s Nest Party Cruise. Champagne and canapés will be shared in an hour’s time. Goodbye, Southampton. See you on Monday.
Posted by Claire at 09:03 No comments:

Welcome To My Blog

Reading and joining this blog is entirely free. However if you have found the content interesting and are feeling generous, then please consider making a donation to my chosen charity. www.justgiving.com/ClaireBaldry